How Piano Pedals Can Enhance Your Music 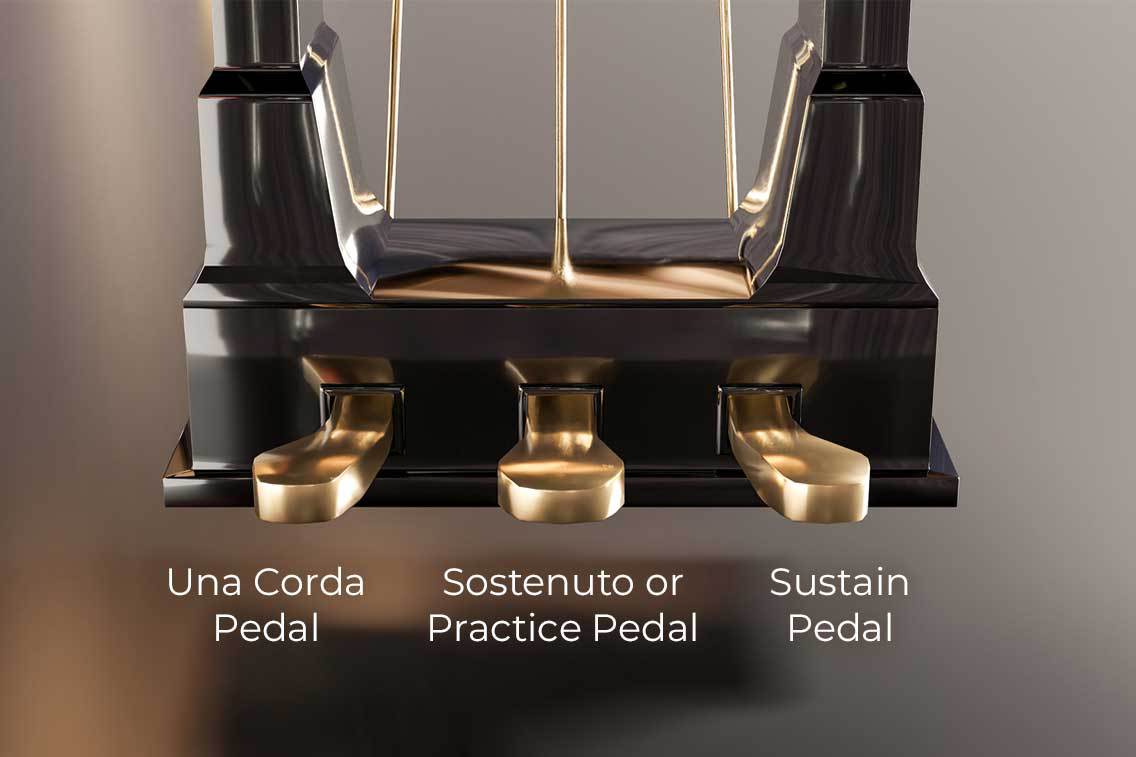 Have you ever wondered what your piano pedals do? Although they may look like a fancy footrest, the pedals on an acoustic or upright piano can enrich the sound you play and can bring an additional dimension to your music. Sound complicated? Don’t panic. Once you understand how piano pedals work, you’ll be able to experiment and discover the subtle nuances that the pedals can add to your music.

Have you ever looked inside your piano? The inner workings of a piano are fascinating. The piano contains a series of strings. On top of each group of strings is a small block of wood covered with felt called a “damper.” When you press down on a key, the corresponding damper lifts up while a small hammer hits the strings, causing them to vibrate and create a sound. As you release the key, the damper comes down and stops the strings from vibrating, thus stopping the sound. Using the piano pedals, you can change when the dampers come up and go down and how the hammers hit the strings.

The sustain pedal (also called the damper pedal) is the pedal on the far right. When you press and hold down the sustain pedal, all the dampers lift up and stay up until you release the pedal. So, when you play the keys, the sound continues to ring until you release the pedal. Once the pedal is released, the dampers come back down and the sound stops. Of the three piano pedals, the sustain pedal is the most frequently used, as it can create a full, rich sound from your piano. But be careful not to overuse it or your music may sound muddy as all the notes continue to flow into each other.

The una corda pedal (often called the soft pedal) is the pedal on the far left. When you press the una corda pedal, the keyboard shifts slightly to the right. Why? On the piano, there are three strings per note for the majority of the keys, with each group of strings tuned to the same note. On an acoustic piano, when the keys shift to the right, the hammers which would normally hit three strings only hit two of the strings. As a result, the sound is softer, less bright and the tone shifts slightly. In an upright piano where there is less space for the strings, the una corda pedal moves the hammer closer to the strings, so the strings are struck with less force, affecting only the volume of the sound.

The sostenuto pedal is not used as frequently as the other piano pedals, so in many modern and upright pianos today this middle pedal is replaced by a practice pedal. When the practice pedal is engaged, a long strip of felt or cloth will rest between the hammers and the strings, thus dropping the volume substantially. The sole purpose of the practice pedal is to decrease the sound volume, which is especially useful when you don’t want to disturb those nearby. For convenience, the practice pedal has a locking mechanism, so you don’t have to keep your foot pressed on the pedal. Simply press the pedal to the floor and slide your foot to the left to lock it into place.

So now you know the answer to the question, “What do piano pedals do?” Each pedal affects the sound of the piano differently. Experiment with your piano at home and notice the changes piano pedals can make to your music.

Want to learn more about how piano pedals can add dimension to your music? Come join us at Piano Forte Music School where our beginning lessons for both children and adults include an introduction to the pedals, so you can keep your feet moving while you’re tickling the ivories.

Did you know? Piano Forte Music School will soon offer voice and guitar lessons in addition to
piano lessons. Contact us to learn more.